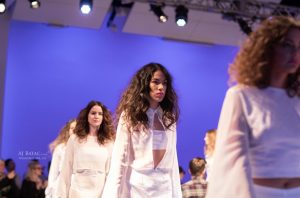 From internationally recognized brands such as Canada Goose, Manitobah Mukluks and Silver jeans to local designers such as Lennard Taylor, Winnipeg has historically been Canada’s garment manufacturing centre. On October 18, graduates from our Fashion Design program in Winnipeg showcased their 8 outfit collection at the 7th annual New Designers Fashion Show at the Manitoba Museum.

The museum was the perfect venue as it was a walk through the history of Manitoba and Canada. Surrounded by exhibits about Indigenous lifestyles to vignettes celebrating Winnipeg’s historic streetscapes, the fashion show featured collections from Amy Aingidlik, Amy McPherson, Chelsea Sumter, Dimple Patel, Kalli Vera, Karleece Lapointe, Nancy Humann and Wendy Sinclair.

As part of the fashion program, each graduate designed and constructed each garment from start to finish. Graduates drew inspiration for their collection from various aspects of their life and surroundings – from their cultural heritage to the concrete jungle.

Voted as top 3 fashion events in Winnipeg by the Winnipeg Nightlife Awards, the show was sold out to an audience of family, friends, MC College staff and Alumni, media, fashion bloggers, photographers, local designers and representatives from Canadian retailers such as Nygard International, Reitman’s and Mondetta.
From embroidered details to bold African and Ojibwe inspired prints, here’s a recap of the New Designers Fashion Show:

After a year of being diagnosed with brain cancer, Tragically Hip Canadian superstar, Gord Downie, passed away on October 17, 2017 at the age of 53. As our final farewell and a tribute, we played “Ahead by a Century” during a portion of the fashion show. “Music brings people together. So my function in anything I do is to help bring people closer in” – Gord Downie.

Did you catch us on Global Winnipeg? See it here!