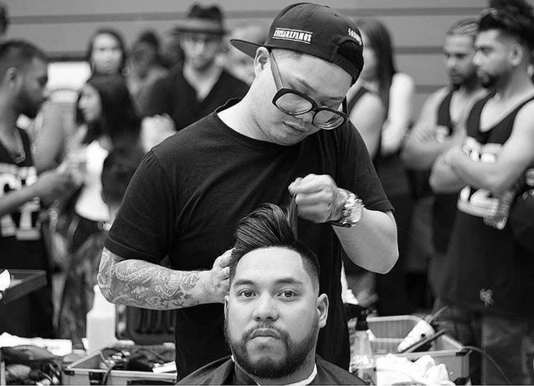 Some know him as Andrew while others know him as “Lord Chink”. As a 2010 Graduate from the Hairstyling program at the Winnipeg campus, he is the face behind the Instagram account with 10,000+ followers, @chinkthebarber. “I’m just an everyday Barber….I’m not trying to get famous. I’m just trying to master my craft and share it with others. Just chase your dreams.” he says.

From Winnipeg to Toronto and Edmonton to Montreal, Andrew has traveled across Canada to compete and learn with the best of the best. Since graduating, he has:

#TBT WHEN I LINED UP REDMAN

Today, he is a Barber at Blacklist Boutique.

His career in Hairstyling started when he was going through a turning point in his life. His mentor and friend, Scott Ramos (one of Canada’s most famous barbers) introduced him to the world of fades and razor parts. “Scott Ramos introduced me to Hairstyling and I thought it looked fun…he convinced me to be a Hairstylist after seeing me at my worst” says Andrew. “Thank you [Scott] for being my inspiration, if it wasn’t for you, I’d be a deadbeat by now” he continues.

He decided to enroll at MC College after our graduate, Guy Lemieux, referred him to the school. “This is embarrassing..roller sets was my favorite part…it taught me how to manipulate hair just by heat and very little products” says Andrew.

Thankyou everyone from #mccollege for making me the hairstylist/barber who I am today. From not knowing how to hold a comb which u all showed me to working at the best salon in Wpg now best barbershop in Canada! You guys are the best especially to my down ass instructor @katiegarrett82

What’s been your biggest eye opener since graduating?
“Being a role model for students and seeing how far you can get from being a stylist/barber”
What’s been most exciting?
“Being recognized for what I do in Winnipeg and other cities by random people…instead of telling people who I am or what I do…I can finally say I made it!!”

What advice would you give to MC College students?
“Keep networking and take in as much education. The hair industry is never ending. Go bless some heads!”